FIRST IN A NEW PARANORMAL SERIES!
I like to pretend I’m just another immigrant trying make her way in New York City…but I’m not.
You may know of my family from stories of an older age. Across all nations, all cultures, my family was once worshipped as gods, cursed as demons and shunned as otherworldly creatures.
Reality? I am shen, but the worst kind of shen there is.
One who would rather pretend to be human than to rule them.
One with no magic.
One hunted by the immortal monster that killed my parents.
And now, I just discovered how grandma found us refuge in America, how she thought she could save me.
She betrothed me – to a dragon.
The Lick of Fire is a mini-series collection from twelve best selling authors. Enter this supernatural world of fire and heat, magic and adventure, and get lost in everything DARK, delicious and FIRE.
BETROTHED TO THE DRAGON is the FIRST in Kara Lockharte's DRAGON LOVERS mini-series. It is the 11th series starter within the Lick of Fire Collection and stands alone from the other books. You do NOT need to have read any other books within the Lick of Fire to enjoy this story. 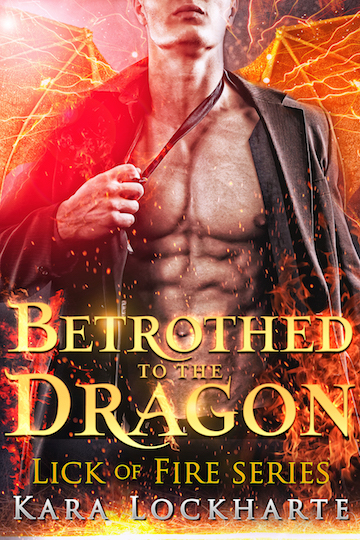 “What do you mean I’m betrothed in an arranged marriage?”
I glanced at my phone. Only one of the connection bars was filled, indicating barely there service. I must have heard her wrong. No way my Alexander McQueen-clutch carrying, Bitcoin-gambling grandmother would say something like that.
“Grandma?”
I glanced at the phone again and saw that the call was disconnected.
Of course. The museum, built in the early twentieth century, was gorgeous in its details from the hand-carved window frames to its Italian marble floors, but sorely lacking in areas with good phone service. I teetered on the stupid heels I had bought for today, dancing around a pile of dusty books resting on the floor, and navigated around the cubicle maze that passed for the doctoral student office.
Fat gray pigeons glared at me, dodging my footsteps as I made my way down the great expanse of stone steps. Grandma loved playing games. Once she had played politics with the fate of empires, and now she invested that talent into stocks and virtual currency.
I hit redial on my phone, and she picked up almost immediately. “You lost a bet, right? You know, I’m pretty sure it’s not legal to put up your granddaughter’s hand in marriage as stakes.”
Next to me, Chinese tourists were having a heated discussion about the best pizza places in the Lower East Side.
Grandma exhaled. “No, Sophie. I made the deal so that we would be allowed to come to this country. It was a different, more desperate time.”
I had tried to assimilate and adapt to human life in America, with blue jeans, chicken nuggets, and a PhD in Museum Conservation. All of it was easier than remembering what I truly was—the reason why so many of my family had died.
I paced trying to release the nervous energy of an all too familiar frustration. “I wasn’t even a year old. There’s no way that will hold up in court.”
Grandma made that harrumphing, barking cough she always made when she was done listening to me whine. “Not legal by human standards, no. But by that of our people, yes. I’ve tried to let you live a life of freedom and to make your own choices as much as you could. But my protection won’t hold forever. I need to know you are safe. And marriage into this family will protect you.” Her voice hardened. “Sophie, you are the last of our line. Even if your power hasn’t manifested, the potential of your blood is still there. This is the only way to keep you safe.”
I was a black belt in Krav Maga. I’d had extensive firearms training from a grizzled old ex-Army Ranger sniper who said I had potential. None of it mattered. I had to be protected. Unlike my grandmother, my mother, and my father before me, I had no magic.
I stopped pacing, and pinched the bridge of my nose. As much as we pretended to be human, we were not.
I clenched the phone tighter. “Why didn’t you ever tell me this before?”
“I had been hoping that some of the plans I made, the champions I sent against the monster, would succeed before it would come to this.” There was a note of sadness in her voice. “But each time it fights, it learns. And every day it grows more and more powerful.”
My alarm vibrated, startling me into dropping my phone. I tried to catch it, but it was too late.
When I picked it up, there was a hairline crack on the screen. Wonderful.
I picked up the phone, turned on the speaker, and spoke louder than I intended, so much so that it startled the pigeons around me into grudging hops. “Grandma, I have to get ready for my talk.”
“There is more that I have to tell you. But we’ll talk more later. Good luck on your presentation, Sophie.” She hung up because she knew I was in no mood to say goodbye.
More? What more could she tell me? Next she’d be telling me I was actually a human adoptee.
That would have been less of a surprise.
The picture of us appeared on my phone’s lock screen.
We looked so different, her and I. Grandma with her white skin, straight hair, and me with my dark skin and wavy hair. The only thing we shared was our eye-shape that humans called Asian. In school, I had always checked off whatever box felt more convenient at the time. African, Asian, Caucasian, Hispanic—I had convincingly claimed them all. Grandma scoffed at the idea of labeling ourselves according to human ideas of ethnicity.
“Our family spans the Earth,” she had said. “A shen does not identify themselves by the tribal groupings of humans any more than a lion distinguishes itself by the particulars of ant kingdoms.” As much as we looked like and pretended to be, we weren’t human. We were the first intelligent life forms on this planet and connected to the deep magical nodes of the Earth. Humans had many names for us: fae, yokai, djinn, apsaras, gods, demons, and monsters. But years and years of intermingling with humans had dissipated most of our legendary magic.
And for the remaining shen with magic? None of it was enough to fight the Devourer when it had entered this world, seeking new victims.
Including my parents.
They had died to save me, not knowing how they had thrown their lives away for the unforgivably flawed shen that I was. 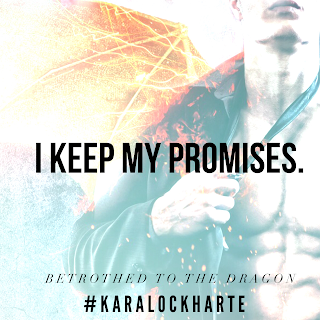 Kara Lockharte is the author of the Space Shifter Chronicles. She loves writing romances featuring smart heroines and sexy alpha shifters in space.
She lives on Planet Earth. 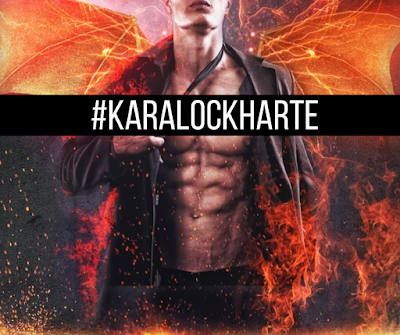