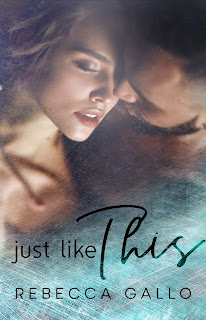 When I saw him I knew - I had been waiting for something just like this.
And then, in the blink of an eye, he was gone.
After giving up a lucrative career in Seattle, I was content with my life in Gig Harbor, taking care of my father during his battle with cancer. Until I met Garrett and he showed me what my life was missing.
Passion. Desire. Love.
Two weeks was nothing but to us it was everything. We scrambled to make the most of our short time together but bitter jealousy, painful truths and devastating grief forced Garrett and I to prove to one another that love can grow almost instantly.
The memories we created were supposed to last, were supposed to carry us through our darkest moments. But what if Garrett doesn’t return? What if I never feel something just like this again? 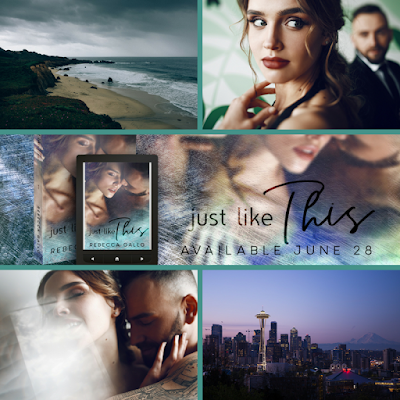 “I have something kind of awkward to ask,” Garrett said quietly once we left the bar and were in the car headed back to my house. I was itching to ask him about his text messages, to have him say the words he had typed aloud, but I couldn’t help but wonder how much influence the liquid courage provided by alcohol had on his bold declaration. When he finally said them to me, he needed to be stone-cold sober.
“Okay,” I replied.
“Can I stay in your guest house until I deploy? Palmer kind of kicked me out.”
Under my breath, I muttered, “Asshole.” Palmer seriously needed to grow up and get a clue. There was never going to come a day when I was going to change my mind. He needed to accept that and move on. Otherwise, we couldn’t be friends.
“Yes, of course,” I told him. “I kind of have a favor of my own to ask.”
“Whatever it is, the answer is yes.”
I winced. “You should probably wait until you know what it is first.”
“Fine. What can I help you with?”
“I’d like you to meet my father,” I said timidly.
The car became uncomfortably silent, and I didn’t have to look at Garrett to know he wasn’t expecting me to ask that.
“He asked about you today,” I elaborated. “He wanted to know if you’re handy around the house.”
Garrett chuckled softly. “I know enough to get by. Why did he ask?”
I explained to him how Valerie embarrassed me when we went to visit my dad. “I didn’t really want to tell him,” I admitted. “But I think he wants to know that I’ll be taken care of after he’s gone.”
Garrett reached across the console and plucked one of my hands from the steering wheel. He brought it up to his lips and kissed it gently. “Then yes, of course, I’ll meet him.”
When we arrived at my house, I unlocked the guest house for Garrett and left him to get settled before walking across the driveway to the main house. I told him to meet me out back when he was ready. While I waited, I prepared dinner for us. Soon, Garrett’s shadowed figure appeared outside, and I watched him through the windows, enthralled by his handsomeness and the way his body moved as he lit a fire in the backyard.
It was so easy to deny that what I felt for him was love because he scared me. In a matter of days, he would be halfway around the world, risking his life on a daily basis. My hands trembled as I chopped vegetables; my mind raced as I thought about the worst possibility. If he died, no one would tell me. I’d be completely alone in my grief. My thoughts distracted me, and when I felt the blade of the knife slice across my hand, I yelped in pain and surprise.
“Shit!” I hurried over to the sink and ran my bleeding hand under the water. Garrett noticed my panic and rushed inside.
“What happened?” he asked, his voice thick with concern. He was quick, grabbing my hand and wrapping it in a paper towel.
“I wasn’t paying attention,” I explained. “I was thinking about…” I let my voice trail off for a moment before I said, “I just wasn’t paying attention.”
Gently, Garrett unfolded the paper towel that covered my hand and ran it back under the water. He dabbed it gently with a clean towel before inspecting it carefully. “I don’t think it’s deep enough for stitches. Do you have a first-aid kit?”
I nodded. “In the bathroom.” I showed him the way as he walked with my hand still cradled in his. He directed me to sit down on the toilet seat and, when he found the kit, started carefully cleaning and bandaging my cut.
“What were you thinking about?” Garrett asked softly.
“You,” I confessed. “I’m scared.”
“I know. You told me.”
I shook my head. “No. What if you die, Garrett?” My question was unexpected, and he looked up at me, his eyes large and dark. “I love you, and who’s going to tell me if you die? Who’s going to know that I love you? That you’re mine just as much as I’m yours? That scares me, Garrett, so much. I’m already losing one man I love. I can’t lose another.”
My voice was on the verge of hysterical, and my words came out too quickly, almost incoherent, but Garrett knew; he understood. The next words that bubbled up were immediately swallowed by Garrett’s crushing kiss. His large hands slid under my jaw, cupping it as he devoured every fear that threatened to surface. My uninjured hand twisted in the front of his shirt, and I pulled him closer, returning his kiss with my own ferocity.
“You might just be the death of me,” Garrett said breathlessly, breaking our kiss.
I grinned in reply, but it quickly faded when I noticed Garrett’s grim expression.
“I’m scared too, Cami. But you can walk away. I won’t ask you to make this kind of commitment.”
I slipped my uninjured hand into his and squeezed. “I’m not leaving. I’ve wanted something just like this for a long time, and now that I have it, I won’t just give it up.” 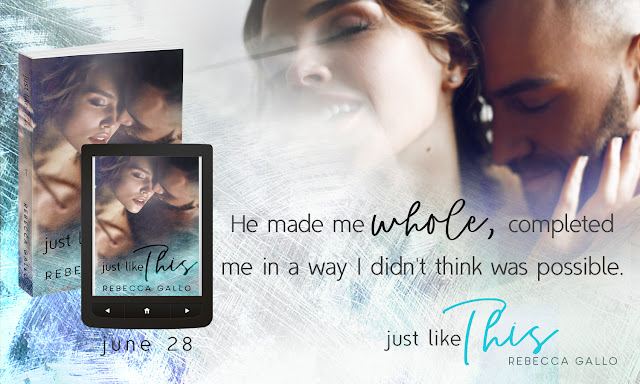 Rebecca Gallo was first indoctrinated into the romance genre by her babysitter who watched hours upon hours of daytime soap operas. She harbored many inappropriate crushes on fictional characters such as John Black from “Days of Our Lives,” Orry Main from the mini-series “North & South,” and Edward Fairfax Rochester from Jane Eyre. She is still in love with Davy Jones from The Monkees.
Rebecca currently lives in the Southwest with her husband, tiny four-year-old terror, and a tuxedo cat with a limp. When she isn’t swooning over book boyfriends or dreaming up romances, she can be found educating the youth of America. Or eating tacos. 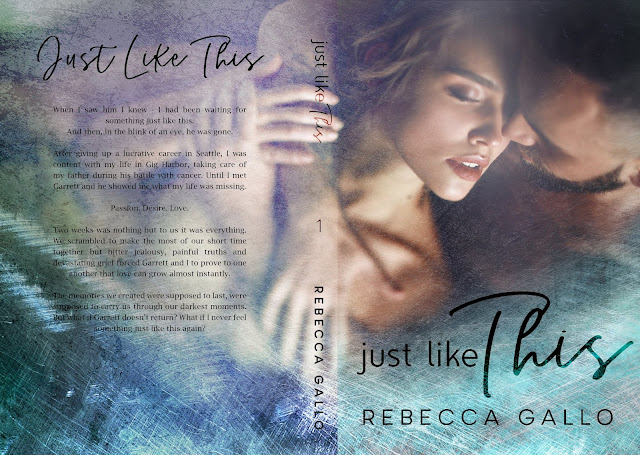