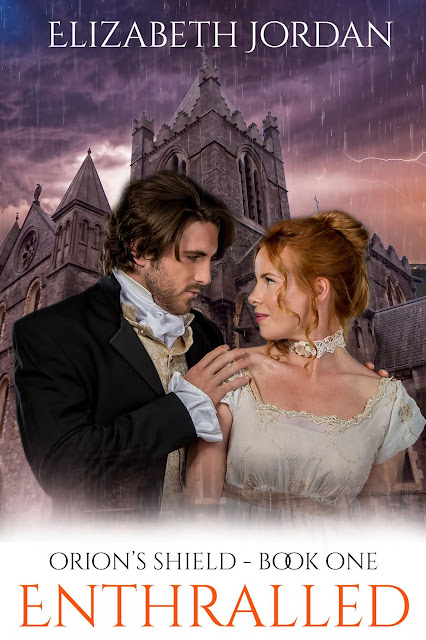 Lord Thomas stopped abruptly in the doorway and gave the young man sitting on the settee an incredulous look. He’d met Julia’s father around back near the stables, and he’d made no mention of any male visitor, not had her cousins just outside the door. The fact they had been sleeping could have allowed someone to slip past them, but then how had the man gotten into the house in the first place? The servants had been ordered not to allow entry to anyone not a relative or a Shield member. It was a mystery and Thomas hated mysteries. He moved as casually as possible to place his body between the two ladies and the young man.
“Lord Thomas, how very good to see you,” Caroline said, rising quickly to her feet. “May I present Mr. Montgomery? He is a friend of Miss Mason’s and has come to inquire about her health.” Turning back to Montgomery, she gestured toward Thomas. “Mr. Montgomery, Lord Thomas is a friend of the Masons and my own family.”
Montgomery stood and gave him a stiff half bow. Thomas’s nostrils flared as he picked up the vampiric scent even more strongly. It was extremely subtle—just the slightest hint of moldering decay, but since Thomas had been bitten he was able to detect the odor right away. The detestable scent had hit him almost as soon as he stepped in closer to the man.
“Montgomery, is it?” he asked tersely, not returning the man’s bow.
“That’s right.”
“What is your Christian name, sir?”
Montgomery raised one eyebrow before replying. “Andrew.”
“And how are you acquainted with Miss Mason?”
Montgomery bared his teeth at him in a semblance of a smile. “We met at her family’s party at Christmas of last year.”
“How odd. I met Mr. Mason outside, and he made no mention of any gentlemen callers. Nor did her cousins at the door mention your presence here. In fact, Miss Mason is not allowed visitors at this time, sir. I’m not sure how you managed to slip in, but I’m sure you’ll understand if I ask you to leave. I wonder that you got past her relatives at all. They have been most diligent in screening all Miss Mason’s guests up till now.”
“Oh, I can be most…persuasive when I put my mind to it. Actually, I’m glad to make your acquaintance, Lord Thomas. Your reputation precedes you.”
Thomas raised one eyebrow. “How so?”
“We have an acquaintance in common, I believe. Mrs. Dubois? I must tell her I’ve met you just as soon as I can. She’ll be most intrigued.”
Thomas felt his face stiffen with shock and fought to keep his composure. Mrs. Dubois—Marguerite Dubois. The creature he tried so hard to forget. The one who had made his life unbearable for so many months. Dear God, was she in England?
The undead thing in front of him was actually flaunting his acquaintance with the vampire. In effect, announcing that he was one as well. Was he taunting Thomas? Montgomery made an effort then to enthrall him. Thomas felt it as thin, steel-like threads, attempting to wrap themselves around his body.
“Will she?” Thomas replied and casually reached under his collar to pull out the large gold cross he wore around his neck at all times. Instantly the tightening threads fell away and the vampire shrank backward. Thomas arranged the cross to lie visibly at his throat, just at the top of his collar. Holding it in his grasp, he whispered a short Latin phrase. “Crux sacra sit mihi lux. Vade retro me.” The vampire recoiled visibly and took a step backward.
“I-I fear I must be leaving, Miss Mason.” His eyes flickered over to meet Thomas’s and he gave him an intense and spiteful glare, raising his chin defiantly. “I’ll return soon to…check on your progress.”
Thomas took a menacing step toward him. “That might not be advisable,” he said in a soft voice.
“Oh, Andrew,” Julia cried out to the vampire, obviously in some distress, interrupting the exchange. “Must you go so soon? I was enjoying your visit very much.” She held out her hand to him.
He smirked at Thomas and then made as if to step around him to take her hand and return his attention to her. Thomas moved with him, blocking him. Montgomery had to settle for peering around Thomas’s shoulder, and he did so with a huff of breath that made Thomas wince. The smell was like carrion left to rot on the side of the road.
Montgomery suddenly turned his attention to Caroline. “It was nice to see you again as well, my lady,” the creature said, giving Thomas a smug glance. “I hope to see you again very soon, Lady Caroline.”
“That wouldn’t be advisable,” Thomas said, cold menace in his voice.
Mason gave Thomas an oily smile that never reached his dead eyes. The idea of this creature even holding Caroline’s name in his mouth made Thomas feel ill.