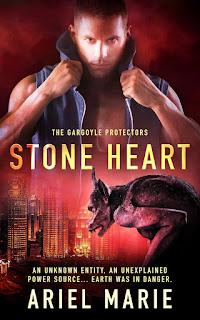 An unknown entity, an unexplained power source... Earth was in danger.
Gargoyles, a winged humanoid race of warriors, had spent thousands of years ensuring the survival of the planet. Rhodack Gahnoth, leader of Clan Gahnoth, demanded his gargoyles defend the realm against a new threat. Sending his most trusted warrior to investigate the unexplainable, he was left speechless when the warrior returned with a little wisp of a female with golden hair by the name of Rina Smith.
Her powers were the strongest of any being, and something was hunting her down. To make matters worse, she was under a powerful spell, believed herself to be human, and she was Rhodack’s mate.
Once the spell was removed, Rina’s true identity was revealed, and no one was more shocked than her. She would need a crash course in the world of paranormal to bring her up to speed. One thing she didn’t need help with was her attraction to the tall, brooding gargoyle. He didn’t hide the fact he wanted her. Her hesitance was met with his persistence.
What Rhodack wanted, he claimed.
Because of who she was, a war that had no place on Earth would spill into the realm. It would be up to Rhodack and his gargoyles to meet this new enemy head-on. Rhodack vowed to protect Rina, but as fate would have it, she wouldn’t need his protection after all—he would need hers.

Rhodack eyed Vikuth as he met him at the entrance to his private suite. He couldn’t believe that the little wisp of a woman didn’t trust him. He was Rhodack Gahnoth. Leader of Clan Gahnoth. Powerful gargoyle. And his own fucking mate didn’t recognize him as her mate, or even trust him. His chest burned with the memory of the fear that was in her eyes. The animal in him paced, wanting to break free and claim his mate. Why would she think she was human? “You sent for me?” Vikuth, in his human form, eyed him wearily. Rhodack leaned against the hallway wall and glared at Vikuth. His lip curled up in disgust that he’d had to send his friend into the room with his mate. She should see the power in Rhodack. She should see he was a great protector, a great mate. But something was keeping her from seeing him. Something was making her believe she was human. What she was, he was unsure. But he was going to find out. “She asked for you,” Rhodack bit out. Vikuth’s eyes widened at the announcement. “Me?” he sputtered. His eyes widened even more, and the smile that began to cross his face slowly faded at the murderous expression Rhodack directed his way. He cleared his throat and straightened to his full height. He glanced at the bedroom door before turning back to Rhodack. “What would she want with me?”“It would seem she trusts you, but not me,” Rhodack snarled. He pushed off the wall and moved to stand in front of Vikuth. He towered over him by a few inches and ensured the look in his eyes was that of anything but a friend. It didn’t sit well with his gargoyle that she’d requested another male over him. “You go in there and you tell her she can trust me. You tell her whatever you need to in order for me to figure out what’s after her and why.” “You sure that’s why you want me to convince her to trust you?” Vikuth asked, cocking an eyebrow. Rhodack released a growl. Of course Vikuth would pick up that there were other reasons why he was being sent into the room. “Don’t worry about what my intentions are. Make her trust me.” “You do know it doesn’t work that way with humans, right?” “She’s not human.”

Ariel Marie is an author who loves the paranormal, action and hot steamy romance. She combines all three in each and every one of her stories. For as long as she can remember, she has loved vampires, shifters and every creature you can think of. This even rolls over into her favorite movies! She love a good action packed thriller! Throw a touch of the supernatural world in it and she’s hooked!
She grew up in Cleveland, Ohio where she currently resides with her husband and three beautiful children.