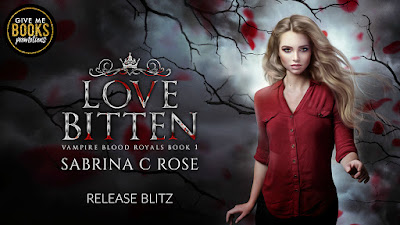 What happens when she destroys a vampire’s prized possession? He wants revenge… in every delicious way he can think of.

It was official. Karma had a vendetta against her.

The latest? Two scantily clad women were making their way up to her fiancé’s office in the middle of the night. On their anniversary.

If karma was too stubborn to do anything about it, she'd take matters into her own hands. And her revenge came in the form of a metal bat against her fiancé’s shiny new car.

Only, karma was plotting against her. It wasn't his car that she'd smashed into oblivion. It belonged to someone else. Someone whose dark emerald green eyes, livid face, and fierce stare left her breathless and quaking from more than just fear.

She should have come issued with a warning. Danger. Caution. Something.

Hell, he even missed the red flag when she'd smashed his car to pieces. But the way she gripped the rod between her fingers had him imagining her fingers digging into him while he drank her blood and pounded her into the sheets.
And the way her doe innocent eyes widened and full pouty lips gasped like she could read every filthy thought in his mind, only revved the beast inside of him.

Julius’s face burned hot as he took in the scene in front of him. He tried to breathe through it, but the beast inside of him rose higher to the surface with every inhale. His canine fangs elongated and sharpened. Two stupid humans were destroying his brand new, top of the line, custom designed car with pristine leather seats so soft that every baby butt in the alter realm would weep in shame.
He was going to kill them.
Calm, brother. Evan’s mutinous voice squeezed between his thoughts of breaking one girl in half before draining the other.
Stop reading my mind. Julius seethed.
Your fangs are down.
He forced them to recede as he closed the distance between them.
“What are you doing?” Julius roared. The sudden sound sent them both jolting up right.
A sharp gasp escaped one as she whipped around, dropping the bat in her hands with a clink at her feet. Her heart beat like a battering ram inside her chest. Its quick pace formed a hypnotic beat that revved the beast inside of him. Her blood pumped up her neck and settled in her cheeks, making him wet his lips in hunger. He wondered what she tasted like. His fangs threatened to drop again.
Julius, you need to think of something else.
Get out of my head.
Focus on something else. You’re losing it.
Evan’s words flitted from his mind as his gaze reluctantly travelled from her throat to her face.
The universe blinked. Everything peeled away, then refocused solely on her. She. Was. Gorgeous.
Her face was so striking. Round, innocent cheeks, big doe eyes, and near perfect symmetry. He wanted to study her for an eternity. Her hazel eyes were wild with emotion. When they found his, a jolt of electricity shot straight to his groin.
Julius sucked in a slow breath as his gaze trailed down the length of her. Golden wavy hair fell down to the small of her back, while fuck-me curves and legs that belonged tightly wrapped around his waist called to him. One singular thought repeated in his mind: Claim her.

"Love this! Julius is hotter than August in Texas! Erica is just adorable..." - Patti
"Loving the story so far..." - Diana
"This will have readers hooked and coming back for more. I know I certainly want to." - Nikki
Wow, just wow! I thought I didn’t really like vampire books. Boy was I wrong. – Anne-Marie
“YES! I love this story…. curious about Gustav, Damian…. and all the other brothers!” – Lisa Brin
“OMG ..I’m loving this!! I’ve just finished chapter 10 and can’t wait for the next!! Yikes! Thanks…❤❤” – Rebecca S.

Sabrina C Rose lives in the dry heat of Arizona, where she spends her days retreating from the sun and her nights cooking up fairy tales that include oodles of paranormal goodness.
When she’s not plotting against the vampire king, she’s kicking back and watching all the Netflix. Current line-up: Agents of Shield, the Originals, Sense8, and Stranger Things.
Ask her why Eric Northman is one of the greatest vampire boyfriends ever created and you may unearth the secrets to the universe (no promises, though).