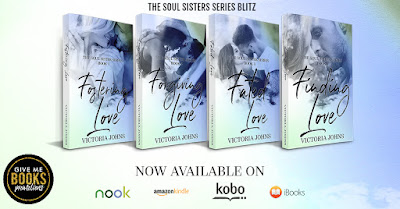 
What do you do when you love someone who's off-limits? If you're me... fall deeper.
You absolutely, must not ever, fall in love with your foster brother. Just try telling my heart that.

Dalton Frobisher has loved the same guy since she was a teenager.
It's just unfortunate that he doesn't love her back, or rather, can't and most definitely shouldn't love her back.
Growing up around the person you believe should be yours, is hard. Seeing him with other girls is harder, but watching him leave is pure torture.
Life is full of regrets, and not telling him how she feels is the biggest regret she has... so far. Dalton wasn't going to miss that opportunity the next time it came around.
She just didn't expect the fallout that followed.
Jonas Drakeson has spent years trying to stay out of her way; he knew how she felt, but he had to be sure she was ready for him. Leaving was the only way to save himself, he just hoped that one day he’d find his way back to her.
One night could seal their fate, one night could decide their future.

Fostering Love is the first book in the Soul Sisters Series, which tells the story of four girls, friendship and their path to finding 'the one'.

It's impossible to get someone to fall in love with you when they've got you friend-zoned. We had sex once and it scared him, but it just made me fight harder. I would prove him wrong, even if it cost me my heart.

Aneelia, Dalton, Charlotte and Florence have always been best friends and self-confessed soul sisters. Supporting each other through thick and thin is the easiest way to survive life's highs and lows, after all, they know everything about each other.

Aneelia Prince has been hiding a secret from her soul sisters.

A shameful night of regret, a misjudged bad decision and a situation read wrong.
Things didn't go as expected when she decided to take a chance on the guy she'd loved from afar. Neely thought they wanted the same thing but what he wanted was something entirely different.

Her attempts to avoid the situation come to a crashing halt when she gets caught between a rock and a hard place. As desperate as she is to act like nothing happened and move on with her life, she finds herself stuck in the middle of his business, surrounded by intrigue and danger. Being close to him is the last thing she wants when it's so hard to forgive him, especially when he's chosen to forget. His regret hurt her heart once and letting him in a second time when her heart overrides her head is crazy.
Never had finding true love been so… dangerous.

Forgiving Love is the second book in the Soul Sisters Series, which tells the story of four girls, friendship and their path to finding 'the one'.

Fake it 'til you make it. It's just a shame my heart doesn't agree.
It's easy to pretend to love someone when it's really the truth.
It's simple really… make my fake boyfriend fall in love with me for real.

Getting what you want, when you want, should be a matter of course. Unless the one thing you want more than anything, doesn't feel the same way.
Charlotte Groves, or Lottie to her friends, is a beautiful, rich and privileged member of Hawkstown's elite and country club circle. In an effort to please the guy she's yearned for, Lottie finds herself agreeing to keeping up country club appearances and playing the fake girlfriend for the town's entrepreneur and hot bad boy, Oli Hart.
What started out as a mutual arrangement, veers widely off course when disastrous events unfold in Lottie's life. Struggling to cope with the aftermath, Lottie decides it's time she lived her life for herself, ignoring the entitled reality she's become used to and the arrangement with Oli that gives him the freedom she so desperately yearns for.
Just like their fake relationship, Lottie Groves isn’t all that she seems either, but she’s hidden behind a mask for so long that letting the world see who she really is, is daunting.
You’re not supposed to mourn the loss of fake love…unless it’s real.
Fated Love is the third passion filled instalment in the Soul Sisters Series.

Running away from the guy I really loved was supposed to help me start afresh, but the consequences were life-changing, almost deadly.

Florence Smith is desperately and hopelessly looking for her happily ever after, at whatever cost.

The Soul Sisters code for Lottie, Dolly, Neely and Flo has real meaning, they’re true friends who connect and understand each other, like true sisters. They're there for each other no matter what.

But what happens when that connection stops and you choose to close yourself off and willingly walk away?

Sonny and Flo were the last singles standing and she dreamed he’d sweep her off her feet and romance her like the classic love stories she adored. Instead, his obvious disdain left her devastated, especially when he didn’t bother to hide.

Her hometown held too many reminders of the life she’d never have, so Flo jumped at the 'opportunity of a lifetime' and made a break for freedom.
Only, freedom was the last thing she got, and now she has to find her way back.

Finding Love- A Soul Sisters Novel - is the fourth book in the series, which tells the story of four girls, friendship and their path to finding 'the one.’

The Soul Sisters Series Collection -
all four books in one box set!

Victoria Johns is a writer who enjoys sharing a happily ever after and believes that it’s every good girl’s dream to experience a steamy one. Growing up in North West England in a large family surrounded by love and support she found her Prince Charming many years ago and enjoys living the life they’ve made with their son.
She’s always had a creative imagination and decided that some of the stories bubbling in her head need to be given life and shared. This pen name gives them the freedom to be loved by others.
When she’s not writing, she’s sewing, cycling or chomping on crisps in front of the TV.