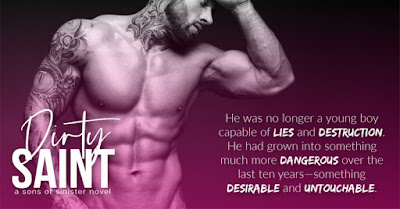 And there he was, showing off on his motorcycle like the cocky jerk I knew he would grow up to be. He pumped a glove-covered fist into the air when he crossed the finish line before he turned around and did a wheelie back down The Strip.
When he reached the end, he laid his front wheel down onto the asphalt and brought the rear of his bike up, pausing in midair. The crowd cheered for him, and he ripped his helmet from his head before pulling his handkerchief down and smiling at everyone around him.
Koah Saint.
The bane of my existence and the person who ruined my life. I hated him beyond the definition of the word. It was as though ten years hadn’t passed. I loathed him just as much as the day he destroyed my world.
I stood in place as the group I was with moved to gather around him. I couldn’t bring myself to do it. Instead, I stayed put and glared in his direction.
As if feeling my burning stare against his skin, he turned my way, and his eyes connected with mine. His olive skin flashed white before his cheeks filled with heat, his dark brows pulled low, and he glared back at me.
He hated me too.
Good.
I wanted the feeling to be mutual.
He climbed from his bike without taking his eyes away from me, and then as if people weren’t crowded around him cheering, he started in my direction and left them behind. My spine and my shoulders grew stiff as I waited for him to reach me. I hadn’t seen Koah since the day he lied on my father and sent him to prison, and I knew being near each other wasn’t going to end well.
His eyes grew red, glowing with the type of fury he had no right to have toward me. If anyone had the right to be full of rage, it was me. He had turned my life into a tornado, ripping my possessions away before dumping me in the middle of nowhere with nothing.
He crossed his large, tattooed arms over his broad chest when he finally stood before me. He was no longer a young boy capable of lies and destruction. He had grown into something much more dangerous over the last ten years—something desirable and untouchable. My heart skipped a beat, and I chastised myself for even letting those thoughts run through my mind.
“Tori,” he said my name.
His voice was deep, reminding me once again that he was no longer a young boy.
“Koah.”
He shook his head. “It’s Saint.”
“I’m not stupid. I remember your last name,” I spat.
The side of his smooth, thick lips lifted, making the dimple in his cheek wink back at me.
“No one calls me Koah anymore. They call me Saint now.”
“They?” I asked.
“Everyone who knows me.”
I shrugged. “Well, I don’t know you.”
The grin slipped from his lips and his eyes hardened.
“No. You don’t. Not anymore, anyway.”
Lies.
Every moment we had when we were younger—the friendship and even the tiny crush I had on him—all of it was lies. He wasn’t a good kid who had been stuck in a terrible situation. He was the terrible situation—a bad boy with a nasty background. I knew about Koah and his past—the death of his mother and his murderous father. I didn’t know details, but I did know he and his family were a black stain on the world.
“I never knew you,” I responded.
His jaws grew tight, making the muscles in his cheeks pop, and his brows pulled lower.
Good.
I wanted to get under his skin. I wanted to crawl within him and destroy his nerves.
“What are you doing here, Tori?” he snapped. “Be careful. If anyone sees you, it might stain your rep.”
“Fuck you, Koah. Like I give a shit about having a reputation. I have real things to worry about.”
He pulled back as if I had offended him when I knew I hadn’t. “Woah. Little Miss Walsh barks back now.”
“Yeah, and my bite’s worst than my bark these days. Thanks to you.”
He chuckled. “In that case, you’re welcome.”
“Don’t,” I growled.
“Don’t what?”
“Don’t pretend like you did me any favors.”
“The world’s a cruel place, Tori. I’d say giving you thicker skin and a mean bite is a favor. You should thank me.”
My mouth popped open, and I gasped. The audacity he had to even think such a thing much less say it out loud. He had destroyed my life with a lie. He hadn’t given me anything but an angry heart, a lonely life, and a struggle to keep my head above water.
“Go to hell, Saint,” I hissed the name he now went by.
He moved closer, towering over me with his caramel-colored Hawaiian skin and dark eyes. Again, his jaw popped as he glared down at me.
“I went to Hell the second I saw your face again. Now do me a favor and leave.” 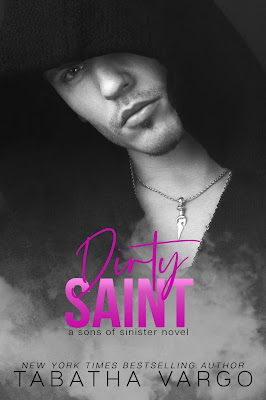 Koah Saint
Son of Sinister. Drug dealer. The number one stunner on The Strip and a BIG FAT LIAR.
They bow to him like he’s the holy grail, but I know he’s really the devil.
Since the day he was dropped on our doorstep, I’ve wanted him out of my life.
He’s a black stain on my memory and the one who put my father away.
Because of him, I’m flipping burgers instead of lying on beaches. To say he ruined my life would be an understatement.
Ten years later, I still can’t stand the guy, but even I can admit he’s sexy beyond belief. I won’t fall for his lusty looks and boyish charms. There’s nothing he can say or do to me to make me believe he’s anything but a lying playboy.
Or is there? 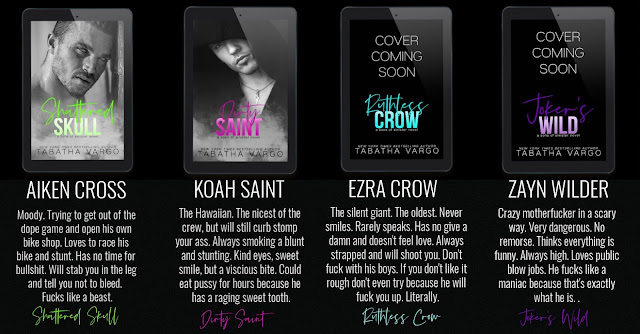 Tabatha is a New York Times & USA Today Bestselling author, best known for her sexy adult romance Little Black Book.
Tabatha writes in all genres, including adult and new adult, and isn't afraid to venture into the dark side on occasion, as she proved with her dark, prison romance, Slammer.
She's an avid reader of all things smutty and the writer of sexy stories featuring redeemable alpha bad boys and sweet, strong women.
Her other loves include her children, her loving, supportive husband, anything historical, and wind chimes.
When she isn't writing, she's texting book ideas to herself.
Tabatha is represented by Jane Dystel of Dystel & Goderich Literary Management.
Subscribe to Tabatha's newsletter and get a FREE BOOK!
http://bit.ly/TabathaVargoNewsletter 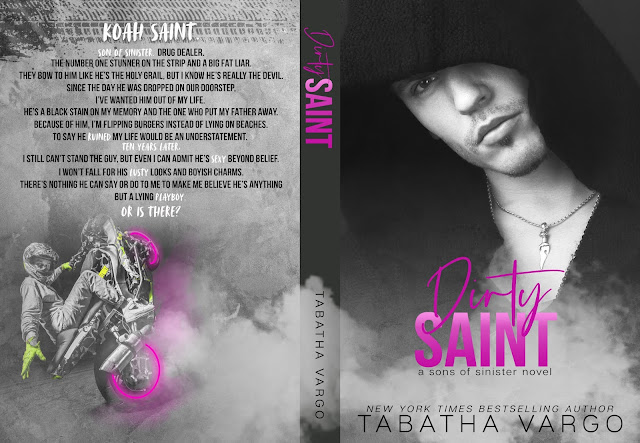