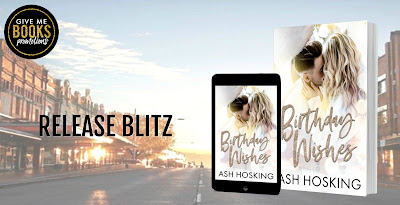 Sadie’s return to Grevillea Falls is nothing like she ever imagined it would be, and she pictured it many times over the years she was away.
Being back in her home town is like a blast from the past, especially when she runs into Dustin.
The town might be much the same, but Sadie isn’t.
Sadie’s not just the one that got away, she’s the one he forced to leave. Dustin always knew if she ever came back he wouldn’t let her go again, and now she’s returned.
But a lot has changed for the two of them.

The one thing that remains the same despite the years of separation is their undeniable connection. Sadie has loved Dustin for as long as she can remember, and Dustin claimed her as his before he even understood what that meant.
Can they move on from past hurts and love each other for who they are now? Or are their differences just too much to overcome?

I sit up in bed trying to calm my racing heart as I look around the room. Nothing is amiss, but for the rain pelting against the window with a vengeance. I don’t hear anything in the house, but I get up to check on Elle just in case since I’m already up. The screen on my phone lights up capturing my attention as I’m reaching for my robe.

Dustin: Come to the door if you’re awake.

What the hell now?
I tie the sash of my robe with an impatient tug before leaving the room. I check in on Elle, who’s still sleeping soundlessly, then hesitate at the entrance to the living room.
I can practically hear Gran telling me that nothing good comes from opening the door to a man who drops by after the sun goes down.
She’s right. I should just go back to bed.
But this is Dustin. I’ve never been able to turn down anything he’s asked of me. I’m not about to start now, even if I’m still annoyed at him.
I don’t bother with turning on a light to see where I’m going as I head to the back door, knowing that’s the one he means if he’s here. I unlock, then haul back the wooden door to find him standing there on the other side of the screen, backlit by the storm raging behind him. Dustin’s completely soaked, dripping water that pools at his feet. The singlet he’s wearing is clinging to his chest which heaves like he’s just run a marathon. His track pants reveal a whole lot more than is decent right now as they cling to him like a second skin.
“Dustin Kingston, what the hell do you think you’re doing?” I grumble, my voice sleep-logged so bad I have to clear my throat.
Dustin wordlessly pulls open the screen between us, so it slams against the veranda siding with a bang as he reaches in to take my wrist so he can pull me out against him. I have no choice but to stumble along until I’m pressed up against his front. My satin robe stands no chance. I can feel the cold water seeping through, making my nipples peak.
“What I’ve wanted to do since the second you walked back into my damn life,” Dustin’s reply is rough. He sounds mad.
I don’t know what he has to be angry at. I don’t get the chance to ask. His hands come up to cup my jaw, then his lips crash against mine as another strike of lightning crackles across the sky behind him.
Dustin tastes like rain mixed with whiskey. His kiss is hard and unyielding. The emotions that have been brewing like a storm inside me since the moment I laid eyes on him again are unleashed. I don’t know if it’s the boom of thunder or the kiss that has the world shaking beneath my feet. Both are a force to be reckoned with. There’s no holding back. No emotions spared as I curl my fingers around the shoulders of his singlet, clinging to them for dear life.

Ash Hosking is an admitted daydreamer and hopeless romantic with a dirty mind from the Gold Coast, Australia, who loves to write stories about strong, smart women and the men they fall for with a mixed bag of emotions thrown in.
She lives with her husband and adorable fur baby, Prim, who loves to keep her from getting anything done.
Ash is always up for an adventure, is addicted to coffee frappes and can never say no to a Tim Tam.