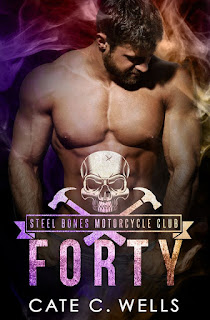 Secrets tore us apart...
Nevaeh
I burned my bridges a long time ago and headed for the big city. Life was fast, but I was making it--until I wasn't anymore. I want a do over. Confront my past. Starting with the man who swore he loved me and left anyway. The big, bad biker who broke my heart.
Forty
I never got over Nevaeh Ellis. Never could forgive her either. My brothers believe she's disloyal, and there's no making that right. But why is she back? And why is she so angry? The longer she's in town, the more I wonder what really happened back in the day. Is she the bad guy--or was I?
There's no time to figure it out. The feud between my club and the Rebel Raiders is raging out of control, trouble is dogging Nevaeh's heels, and if I don't make the right call this time--she's not gone. She's dead.
Forty is a steamy, second chance romance. It's the sixth book in the Steel Bones Motorcycle Club series, but it can be read as a standalone. It is intended for adult readers.
HEA guaranteed.

"Ms. Wells is a powerhouse, continually bringing such flawed characters to life...she is the real deal." - Leslee, Goodreads

"Nevaeh is probably one of my favorite characters, definitely top 3...I loved her crazy a**." JJ, Goodreads 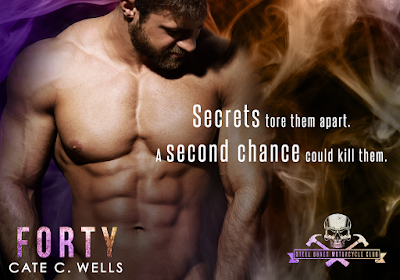 Cate C. Wells is the author of the Steel Bones Motorcycle Club series. She writes gritty, real, emotionally satisfying romance. She’s into messy love, flaws, long roads to redemption, grace, and happy ever after, in books and in life.
Along with stories, she’s collected a husband and three children along the way. She lives in Baltimore when she’s not exploring America with the family. #allfiftystates Want a heads up on new releases and special offers? Sign up for my newsletter at catecwells.com