Everything I Can Never Have 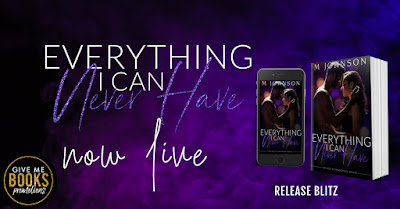 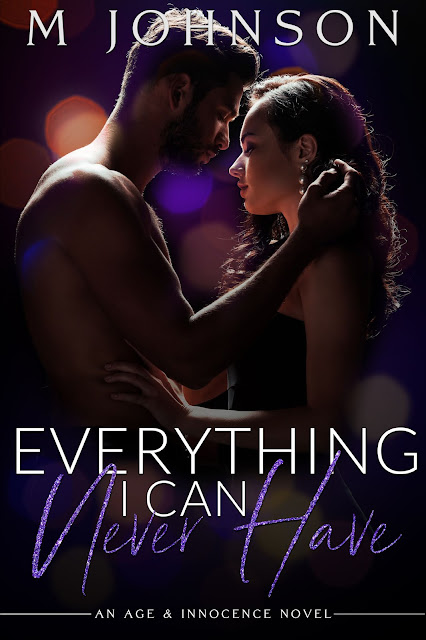 Title: Everything I Can Never Have
Series: Age & Innocence #2
Author: M Johnson
Genre: Taboo/Forbidden Romance
Release Date: February 17, 2021
BLURB
She’s my best friend’s little girl.
The daughter I never had.
At least she was, until I kissed her on her 18th birthday.
I’d just discovered my wife was cheating on me.
I sought comfort in someone I shouldn’t have.
I stopped, because it was wrong.
Not because I didn’t want her.
I’ve kept my distance.
Avoided being alone with her.
Until her father asks for my help.
Now she’s living with me.
Her father trusts me.
He shouldn’t.
Because I’m not sure I trust myself. 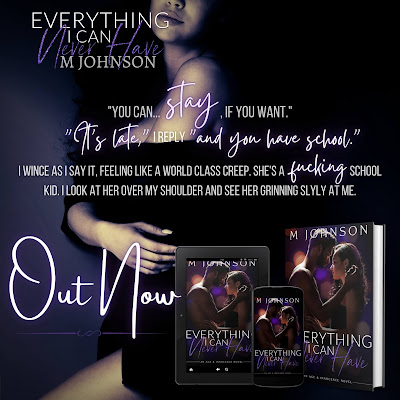 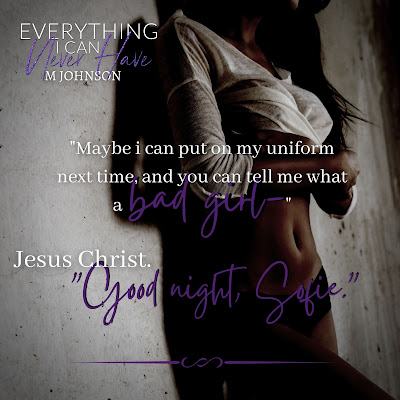 EXCERPT
“Never have I ever lied to my parents.”
“You’re being tame.” I narrow my eyes at him.
“Yeah, well, I’m not about to start talking shit with my friend’s kid,” he growls as we both take a drink. “I don’t need your dad coming for me because I told you about all the crazy shit he and I used to get up to. Or worse, giving you some bad ideas.”
“Oh, so there is crazy shit?” I tease, leaning in.
It’s so cute he thinks he could be a bad influence on me. If he knew half the shit I got up to, he wouldn’t think I was so sweet and innocent. He clears his throat and shifts his attention away from me. I hide a smile, fully aware that he could stare right down the top of my dress if he wanted to, something he’s clearly trying hard not to do.
“Hah, nice try,” he says, a glint of life in his eyes, something I haven’t seen in a long time. “Your turn.”
“Never have I ever… had sex in a car.”
“You’re seriously asking that?” He lets out an uneasy laugh as he rubs his jaw, directing his attention to anywhere but me. “Pass.”
“You can’t pass,” I complain, nudging his thigh, my touch lingering a little longer than it should. “Come on, Zave, it’s just a game. Live a little, for once.”
“Fine.” He rolls his eyes and takes a drink. His eyes widen when I do too. “You’re… You’re serious?”
I nod, grinning at him, pleased he finds that so shocking. I bet he thought I was still a virgin. I’m sure I have nowhere near as much experience as he does, but I know more than enough to be confident in myself.
“Your turn.” I smirk.
“Never have I ever had sex in a movie theatre.” His eyes lock on mine as he waits for me to react. I press my lips together, wetting them with my tongue and take my time to answer.
“Does masturbation count?”
His eyes flash, then darken. “No.”
“Too bad.”
I smile and set my drink down and watch him as he swallows his in a single mouthful. Shivers race down my spine, my thighs tingling as he leans closer to me, heat radiating off him like a furnace. I feel dizzy, the smell of whiskey on his breath mixed with his signature cologne is as familiar to me as my own scent. He’s clearly drunk and I’m well on my way there, too. All I want to do is kiss those lips and see if he tastes as sweet as I imagine, but I stop myself. For now.
“Your turn, Sofie,” he whispers.
Tilting my head, I drape my hair over one shoulder to show my neck. His knuckles go white as his grip on the whiskey bottle tightens, his glazed eyes sweeping over me. I’d love to be inside his head right now. Is he thinking the same dirty thoughts as I am?
“Never have I ever showered naked,” I say.
He grunts, his eyes narrowing as he pours the shot into his mouth and swallows.
“Now you’re just messing with me. You’re trying to get me drunk.”
“You were already drunk before I came along,” I remind him. “Besides, you’ve answered yes to every question. If my plan was to get you drunk, I wouldn’t need to try very hard.”
“Never have I ever tried to get my dad’s best friend drunk,” he grumbles.
“Now who’s trying to get who drunk?”
Giggling, I drink down my shot, then I push my glass over to him and wait for a refill. When he’s done, I lift my gaze to his and wet my lips.
“Never have I ever used my mouth to make someone come.”
I pause, my gaze unashamedly sweeping over him before I drink my shot. A low growl rises in his throat. He grips his glass and lifts it to his mouth, tossing its contents back, then he fills his glass again and drinks that too. I look at him quizzically.
“I figured multiple orgasms is worth at least two shots.” He smirks.
Oh God.
I press my thighs together as warmth pools between them. He runs his fingertip over the rim of his glass, his eyes never leaving mine. I lift my eyebrows, waiting, daring him to be the one to push this game over the fine line we’ve been treading on. Or at the very least, clue me in on what he’s thinking.
“Never have I ever had dirty thoughts about someone I really fucking shouldn’t.”
I suck in a breath of air and swallow, forcing it deep into my lungs as he drinks down his shot. Holy shit. I’m not imagining this; we’re daring the other to make the first move, and I’ve never wanted someone as much as I do right now.
“Is that a no, Sofe?”
I tilt my head back and drink down my shot in response. My heart thuds in my chest as I open my mouth to speak, because it’s now or never.
“Never have I ever wanted to fuck my father’s best friend.”
He stills, his eyes dark and sharp as he watches me bring my glass to my lips. The silence between us stretches out like the final note of a song, just waiting to fade. His eyes burn into me, flashing with understanding as I take a long, steady drink and then set my empty glass down.
If that doesn’t make my intentions clear, I’m not sure what will. 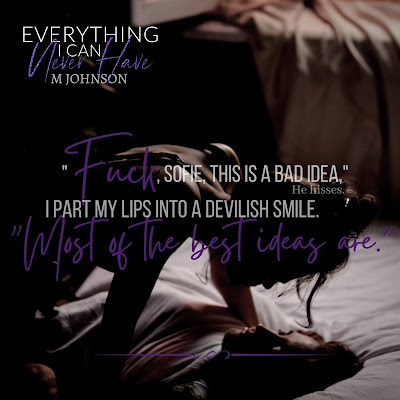 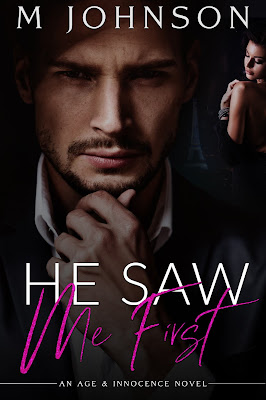 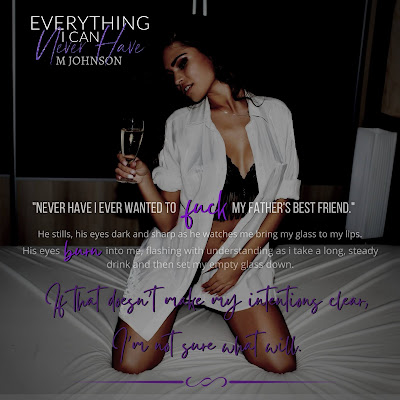 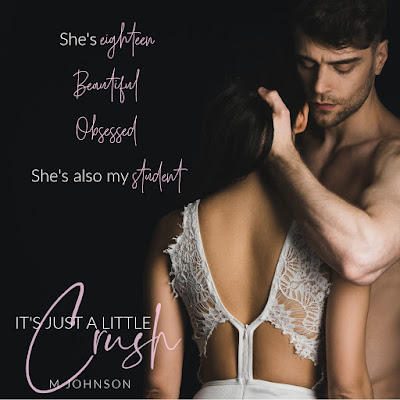 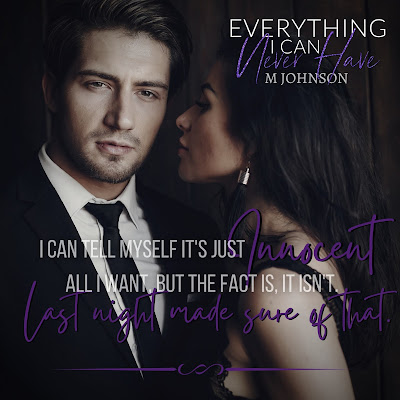 A New York Times and USA Today bestselling author under the pen name Missy Johnson, Michelle has recently ventured over to the dark side with her debut dark romance novel, He Saw Me First.
Michelle lives in a small town in Victoria, Australia with her husband and young daughter.
When she’s not writing, she can usually be found looking for something to read.