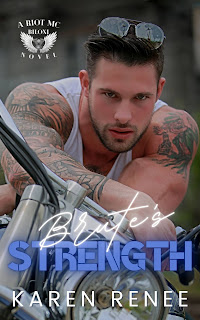 The sexy, action-packed second book in the Riot MC Biloxi series from Karen Renee.
As Vice President of the Riot MC Biloxi Chapter, Brute lives for his motorcycle club. Meeting Kenzie Whitehall challenges his dedication to his carefree lifestyle. Everything about her appeals to him, but he knows she’s looking for commitment. She’s forced to tell him she’s a single mom which should send Brute packing, but he can’t stay away.
Meanwhile, Brute has a homicide detective breathing down his neck. The officer believes Brute has answers in an unsolved murder, and he isn’t above playing Kenzie against Brute to solve the case.
When Kenzie’s ex-husband finds out she’s dating a biker, he threatens to drag her back to court regarding custody and child support payments. Kenzie refuses to give up her shot at happiness with Brute to appease her ex-husband.
Even though he’s falling fast for Kenzie, Brute knows walking away from her is the best thing for her and her daughter. Leaving should be easy. But with three hearts on the line, will Brute find the strength to fight for love? 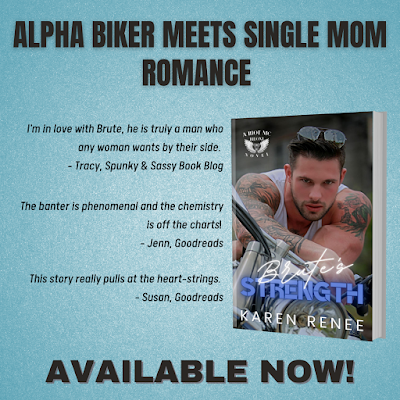 MR. BRIGHTSIDE by The Killers
COME BY ME by Harry Connick Jr.
LET’S GO CRAZY (LIVE) by Prince and The Revolution
AMERICAN WOMAN by Lenny Kravitz
YOU CAN’T HIDE AWAY FROM LOVE by Jamie Cullum
IF THE STARS WERE MINE by Melody Gardot
I WON’T BACK DOWN by Tom Petty and The Heartbreakers
HEADPHONES by Michael Franti and Spearhead
FOLDING CHAIR by Regina Spektor
BABY SHARK by Pinkfong

He hadn’t appreciated how well he’d slept next to Kenzie in the past. Not until that night, when he dozed off only to wake up in a cold sweat. The third time it happened, he went to the bathroom. As he wandered back to her bed, he saw it was quarter to four in the morning.

His eyes had adjusted to the dark, he found his pants, and quietly pulled them on.

She turned on her bedside lamp and he squinted. He watched her reach under her pillow and pull out her satin nightie. She got out of the bed, pulled on the nightie, and turned around.

Her eyes blazed at him. “You did not strike me as a runner.”

She leaned forward. “Tired! Whatever, Vaillant! I fucked up and told you how I was feeling because you told me not to bottle shit up and to always be honest with you. Is that a one-way street now?”

She shook her head. “I hear the placating tone coming my way, and I call bullshit. Seriously, Sam. I gotta be honest with you always, but that courtesy doesn’t extend my way?”

His head turned marginally. She’d turned shit around on him, and he didn’t like it. “What are we fighting about?”

“The double standard, Brute. You don’t have to say you love me, but you don’t feel anything for me?” she asked, throwing an arm out. She shook her head again, and stalked toward the bathroom. “I shouldn’t ask that. Besides, you’re right. It’s probably better if you go. Neither one of us is sleeping, not that I’m likely to sleep now, but have it your way. I’ll lock the front door in five minutes.”

She closed the door to the bathroom, and he heard the lock click. The hollowness in his stomach wasn’t hollow anymore. It burned with a pain he hadn’t felt in a long damn time. He sat on her bed, put his elbows to his knees, hunched over, and held his head in his hands. She was right, he’d given her a double standard.

What the hell was he supposed to do?

He wouldn’t leave her like this, that much he knew. Whether he could make it right with her, remained to be seen.

Waiting for her to come out of the bathroom felt like an eternity.

He turned his head when she opened the door and felt a gut punch. Her eyes were puffy and bloodshot. That was his fault.

With his eyes on hers, he sat up straight and held a hand out to her. She twisted her lips, but put her hand in his while she slowly made her way to him. He didn’t want her sitting next to him, so he let go of her hand and took her by the hips. She gasped, but her legs spread as he put her on his lap so they were chest-to-chest and face-to-face.

Her hands wrapped around his neck. “What for?”

His forefinger traced around her eye. “This. I never want to make you cry, Zee. And, I’m sorry for giving you a double standard.”

Her brows went up even as her chin dipped. She kept quiet.

“I have feelings for you. More damn feelings than I’ve had for a woman in a helluva a long time.”

He heard and felt her shuddering breath. “That goes both ways,” she whispered.

With his forehead against hers, he asked, “You have feelings for a woman, too?”

Her fingers gave his neck a playful squeeze. “No. I have—”

“I got that when you laid the honesty on me, babe. Scares the hell out of me because I haven’t done anything to deserve that.” 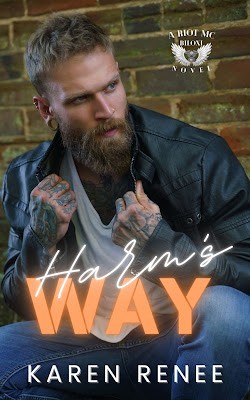 Karen Renee is the author of the Riot Motorcycle Club, Beta, and O-Town series of books. She once crunched Nielsen ratings data but these days she brings her imagination to life by writing books. She has wanted to be a writer since she was very young, but it's taken the last twenty plus years for her to amass enough courage and overall life experience to bring that dream to life. Some of those life experiences came from the wonderful world of advertising, banking, and local television media research. She is a proud wife and mother, and a Jacksonville native. When she's not at the soccer field or cooking, you can find her at her local library, the grocery store, in her car jamming out to some tunes, or hibernating while she writes and/or reads books. 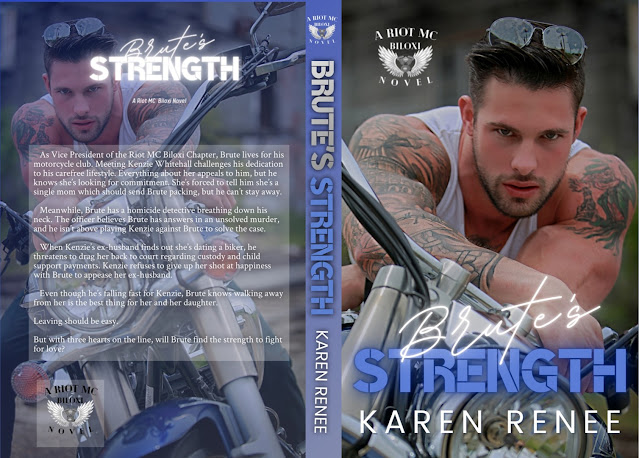